Appirio transitioned from Gliffy to Lucidchart, and Lucidchart is now a staple for every project team and expanding to teams across the org, including finance and HR. Appirio has enjoyed additional benefits after upgrading from a Lucidchart Team to Enterprise account.

IMPORT VISIO AND GLIFFY DIAGRAMS
When Appirio moved to Lucidchart, employees were able to seamlessly import all their Gliffy diagrams without recreating any of their work. Consultants are able to import and export Visio diagrams that some clients use for their processes, allowing Appirio to continue working in the cloud.
BUILD INTERACTIVE DIAGRAMS
Consultants diagram processes while talking to clients, and they use hotspots and layers to create interactive diagrams demonstrating the proposed and current processes.
COLLABORATE IN REAL TIME
Appirio has employees around the globe, so Lucidchart's real-time collaboration features have been crucial for keeping everyone on the same page regardless of location.
ENJOY ENTERPRISE FEATURES
In moving from a Team to Enterprise account, Appirio has enjoyed increased security features, such as Lucidchart's SCIM and SAML integrations. They also have free view-only users for the entire organization and a dedicated customer success manager.

Appirio helps customers improve worker and customer experiences with outcome-oriented consultants who bring the latest digital thinking and unmatched cloud experience, using applications such as Salesforce, Workday, and Google. With many platforms and processes to keep track of during the implementation process, Appirio consultants rely heavily on process maps and other visuals to assist clients in successfully implementing these solutions. 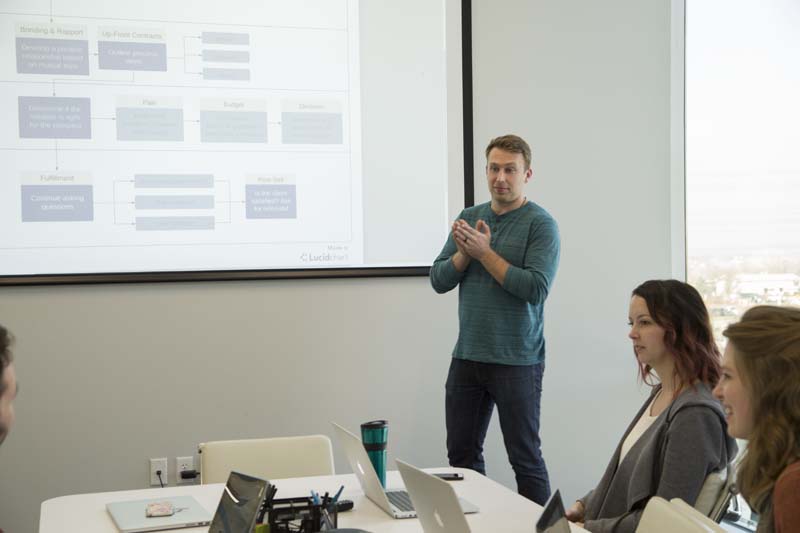 With countless employees diagramming every day, Appirio needed a more efficient solution for working visually. They initially tried using Gliffy to meet this need. While Appirio itself runs its business in a 100% cloud environment, many of their clients still rely on desktop Visio for creating process diagrams and other visuals. When Appirio consultants work with these clients, they need to import and export the Visio diagrams to continue working on them in the cloud.

The problem was that Gliffy’s Visio import often skewed or corrupted files, which meant Appirio had to purchase a few Visio licenses so their consultants could manually fix broken documents. It was a painful process that created far too much additional work.

Switching from Gliffy to Lucidchart

As the company looked to move to a new diagramming platform, they realized many employees had already requested Lucidchart licenses. Lucidchart’s cloud-based software offered seamless Gliffy and Visio import/export and seemed like a natural fit. Appirio made the switch, and employees were able to transfer over all their existing diagrams without missing a beat.

Aaron Barratt, Senior IT Specialist and Lucidchart admin at Appirio, describes the switch:

“Considering the number of users we originally switched as well as the number of documents we were preparing to move, the switch to Lucidchart was extremely smooth because of the Gliffy import feature. That took care of most of the headache for us."

Lucidchart has become a staple for every project team at Appirio, with consultants using it to map alignments or process flows. They find it especially useful for diagramming a process while on a discovery call so that by the end, they have a visual to present to the client and gather feedback on. Using hotspots and layers (very popular features at Appirio), consultants create interactive diagrams to demonstrate the current and proposed processes to a client. Appirio consultants will share diagrams with their clients in Lucidchart so they can view them in the cloud. When necessary, they can also export diagrams as Visio files. 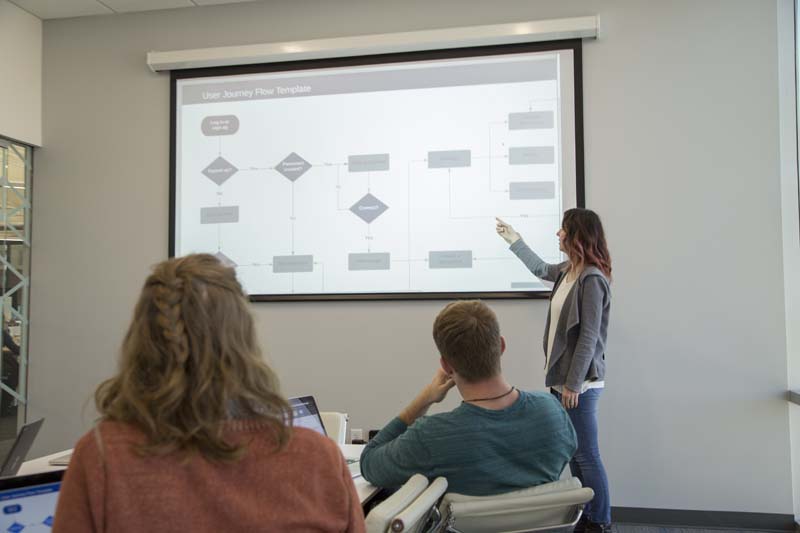 Adoption has spread organically as internal teams witness the work of project teams in Lucidchart. “HR has really started falling in love with some of the features, especially around creating org charts. That was something they struggled with in the past, but Lucidchart makes it so easy to design an org chart that just looks so good,” Aaron explains. “The finance team has also started using it to map some of their financial system integrations.” Aaron is confident that almost every Lucidchart feature is being used somewhere at the company.

Appirio is a virtual company with employees spread across the globe. As a result, Lucidchart’s real-time collaboration features have been crucial. Employees can keep data updated across different time zones, track edits, and work simultaneously on documents from locations across the world.

“These collaboration features are what we’ve always hoped for. They have smoothed out the process of project teams working together when half of the team is on the other side of the world,” Aaron says. “There’s now a very steady, almost around-the-clock flow as opposed to before, when the team in one country would work on something for a day and then send it to the team in another country who would work on it for another day. Now, it’s just flowing straight through as though we are all in the same room.” 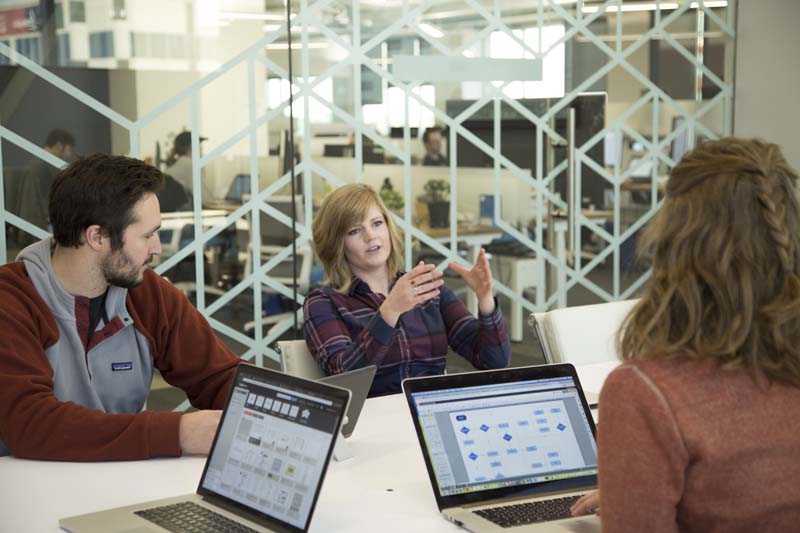 Switching from Team to Enterprise

As Lucidchart spread organically throughout the company, Appirio’s Lucidchart sales rep Tucker realized that the company would benefit greatly in moving from a Team to an Enterprise account. Aaron and his team ran a case analysis, running metrics on the current use of Lucidchart and exploring the Enterprise offering. After they realized what upgrading would mean for both end users and admins, they decided to upgrade. The transition to Enterprise was seamless and produced immediate benefits, especially with the ease of management and security.

From Aaron’s standpoint as an admin, the security features have been the biggest benefit. Aaron describes:

“We use Okta as our single sign-on, so being able to have a SAML-enabled app versus one requiring a username and password was a really big deal for us. Having SCIM to auto-provision and deprovision in Lucidchart was also very appealing.”

These security features have brought peace of mind. With username and password logins, if someone leaves the company and Aaron didn’t manually deactivate their Lucidchart account yet, the employee could still access their Lucidchart account and documents. Now employees who leave automatically lose access, which Aaron deems as a “beautiful thing” that saves the team lots of time.

Appirio also found peace of mind in the fact that account ownership is now under the company name rather than the admin name. They no longer had to worry about an admin still owning the account’s content if they left the company. Instead, the account and all documents are legally owned by the company rather than an individual.

“This option was icing on the cake and just kind of polished off something that was already going well. It really drove home the point of the ownership, which was a very nice touch,” describes Aaron.

With an Enterprise account, Appirio now has free view-only Lucidchart users for the entire organization. This feature has facilitated team projects and helped others become aware that Lucidchart is available for them. For example, project managers know that any design project will start in Lucidchart. They create the base documents and then share them with their team. Even those without a license can view and comment on the document and can then request a license to edit the document moving forward if needed.

The move to Enterprise meant Appirio gained a dedicated customer success manager, Nick. Nick shows employees how to get more out of their Lucidchart accounts in a way that fits Appirio’s culture, which is more of a “go find it yourself” mentality rather than formalized trainings. “Not all companies bend so easily to match our unique structure,” says Aaron. “It’s been great that Lucidchart is so willing to work with us on that.”

Nick conducts live training sessions, but the webinars are then published on the company’s internal wiki. Users can go find the content they want, and according to Aaron, nearly every user at the company views these webinars.

Overall, the switch from Gliffy to Lucidchart and Team to Enterprise has left Appirio very pleased. According to Aaron:

Get your entire company working visually with Lucidchart.