Mark Roke, a technical product manager at Clearvision, uses Lucidchart to build mind maps, product roadmaps, and flowcharts that allow him to communicate more clearly with his colleagues.

INTEGRATE
Mark can quickly and easily answer questions from the development team by inserting process diagrams directly into Jira tickets, saving himself and his team a great deal of time.
BRAINSTORM IN THE CLOUD
Mark's team uses mind maps to categorize and group ideas as they brainstorm, helping them reach solutions faster. With their mind maps in the cloud, the team can easily share ideas with anyone in the organization.
VISUALIZE PRODUCT ROADMAPS
In less than 10 minutes, Mark can create a product roadmap to share with executives. The map helps executives quickly grasp the vision for product developments and stay in the loop as the product map evolves.
SHOW ROI
Through product functionality diagrams, customers quickly see how Atlassian products work together and provide added value.

When Lucidchart first joined forces with Clearvision, the senior executives at Clearvision felt confident that the partnership would provide Atlassian users with an unparalleled collaborative experience. Simon Wood, CMO at Clearvision, commented, “We at Clearvision are very excited about the opportunities this partnership will bring. Lucid’s strong presence within the Atlassian ecosystem complements ours, while its powerful visual communication tools will be a great addition to the portfolio of products and services our clients love.”

Perhaps Clearvision’s confidence comes from their own experiences using Lucidchart as part of their daily workflow. For example, Technical Product Manager Mark Roke uses Lucidchart to instantly provide important information to his team.

Mark has only been using Lucidchart for four months but is already convinced of its capacity to improve communication for his team. And he says getting started with the platform required absolutely no formal training on his part. As a product manager, he has to convey a lot of information to a lot of people, and Lucidchart helps him do so in a timely manner.

From scribbles and whiteboards to flowcharts and mind maps

When a colleague passes him a paper with a scribbled diagram on it and says “Make this,” Mark is able to make sense of the chicken scratches by making a diagram in Lucidchart. The result is an easy-to-read and visually appealing diagram that he can pass off to his team of engineers.

Mark loves a good flowchart, and these diagrams are perfect for describing processes to the software dev team. He will attach them to the JIRA tickets so members of the team can turn to the visual rather than always coming to Mark with questions. 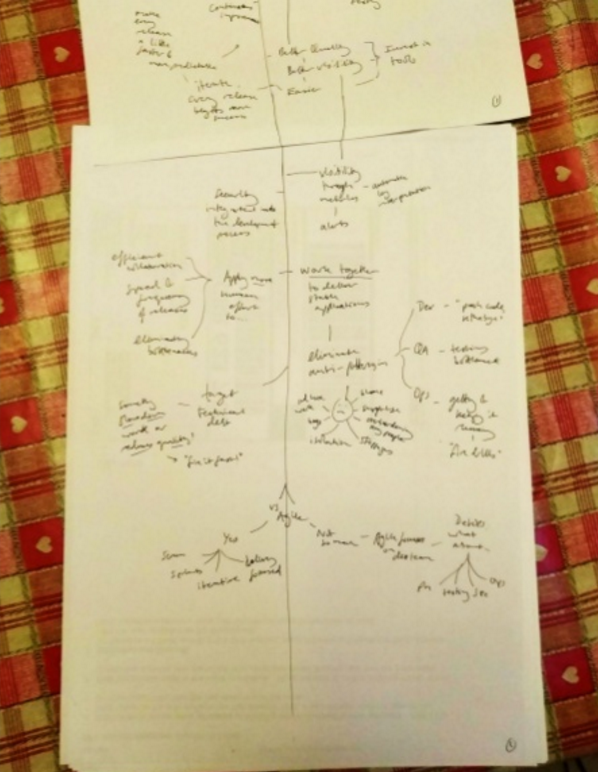 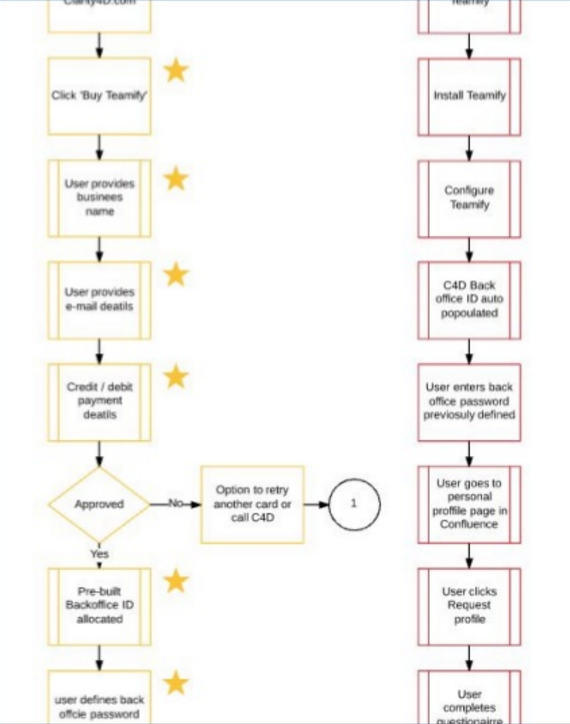 Mark is a big fan of whiteboards for getting all his ideas out, but unfortunately, he can’t share his ideas from a whiteboard. So after a productive whiteboarding session, Mark immortalizes his thoughts with a Lucidchart mind map so he always knows where to find them and can quickly share them with his entire team.

For example, while trying to determine the use of Confluence spaces at Clearvision, Mark was in a meeting where employees were simply shouting out their use cases. In all the chaos, no one was getting a clear picture of the spaces in use. To make sense of it all, Mark took everything he’d heard and designed a color-coded mind map, which he explained using Lucidchart’s presentation mode. Mark describes the mind maps he can create with Lucidchart, saying:

“If these don’t make sense to somebody, I don’t know what will. They’re clear and to the point and so quick and simple to put together.” 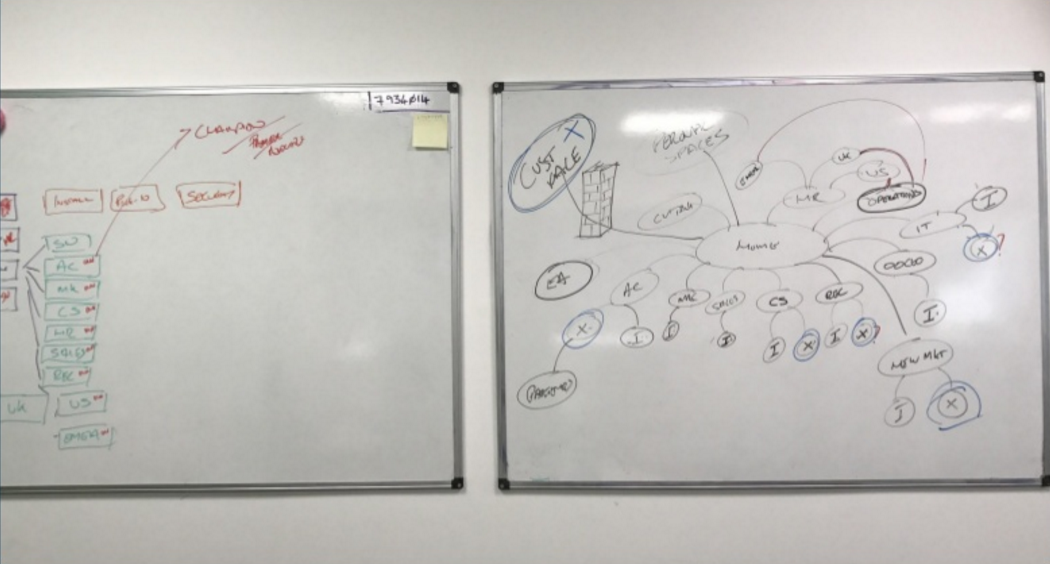 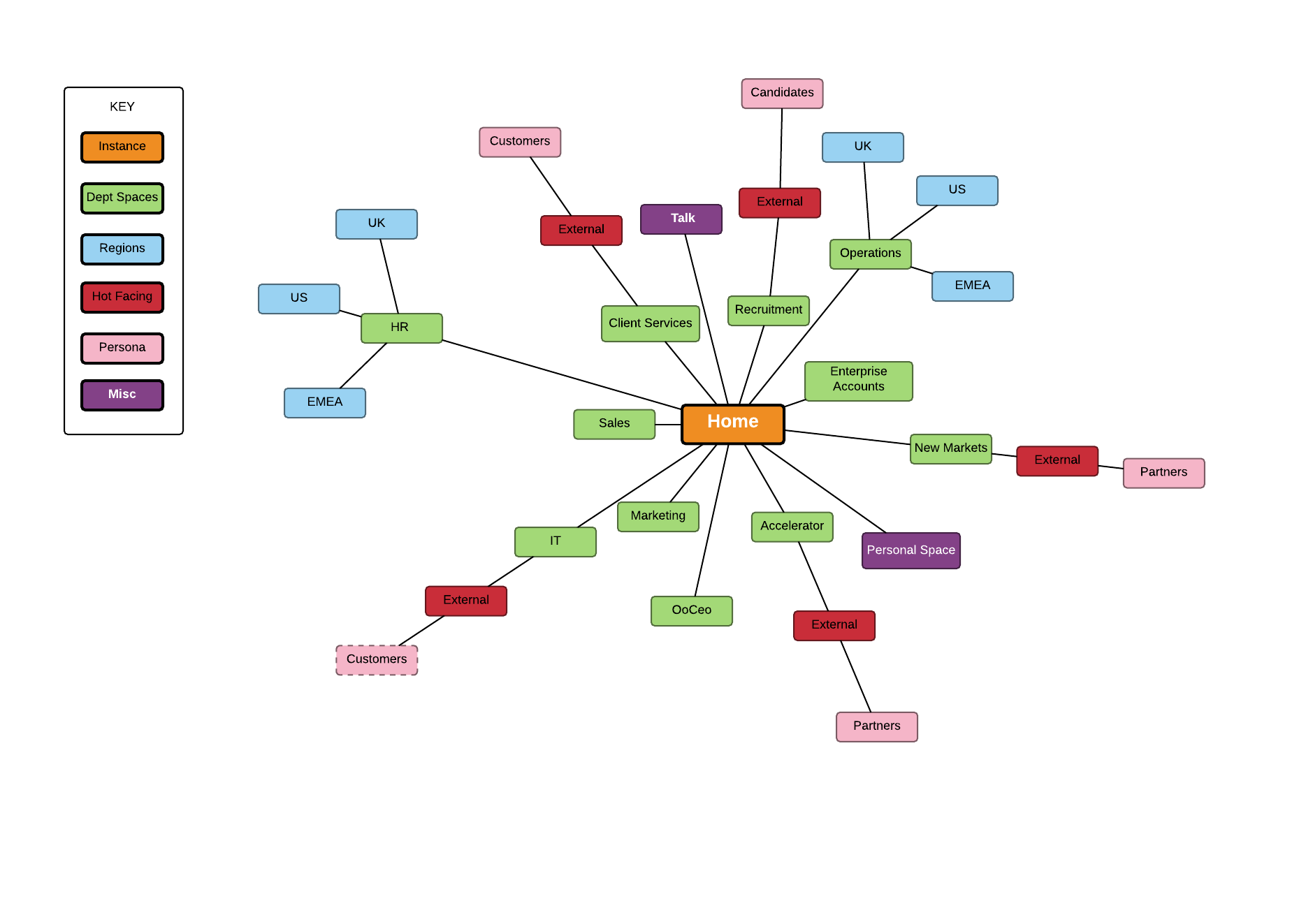 Mark has also found Lucidchart valuable for communicating the product roadmap to his CEO. These high-level roadmaps are short, simple, and sweet, allowing leadership to quickly grasp the ideas being presented. As the roadmap evolves, Mark simply makes a copy of the original and then revises it as needed. All his roadmaps live in a folder in Lucidchart for easy reference. And they take him less than ten minutes to create. 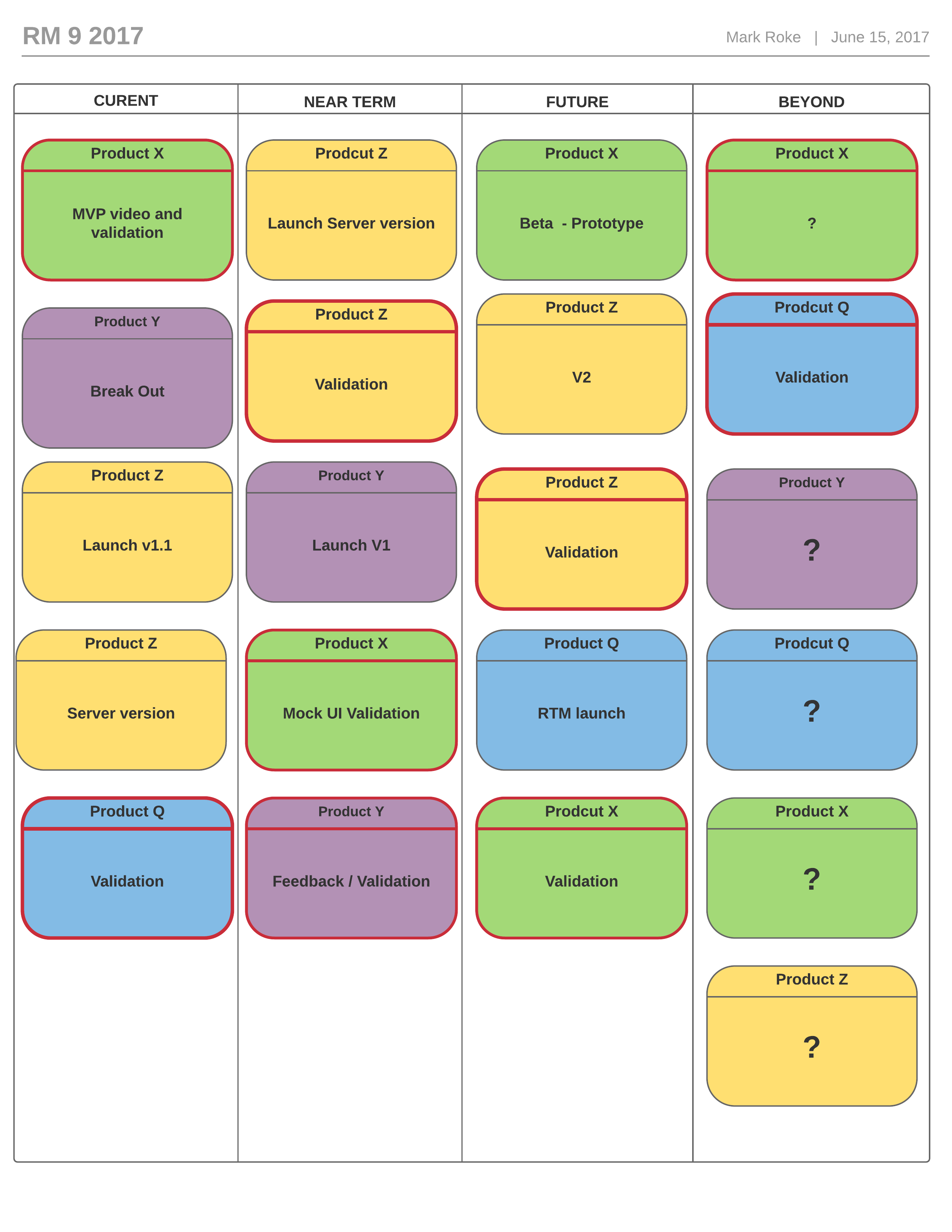 Lucidchart is assisting other teams at Clearvision as well. When the marketing team was trying to figure out how they could convey the common functionality among Atlassian products, Mark got creative and helped them out. He built a diagram using different Lucidchart shapes and images. The result was a visual clearly communicating the functionality of all Atlassian products and the relationships between them. 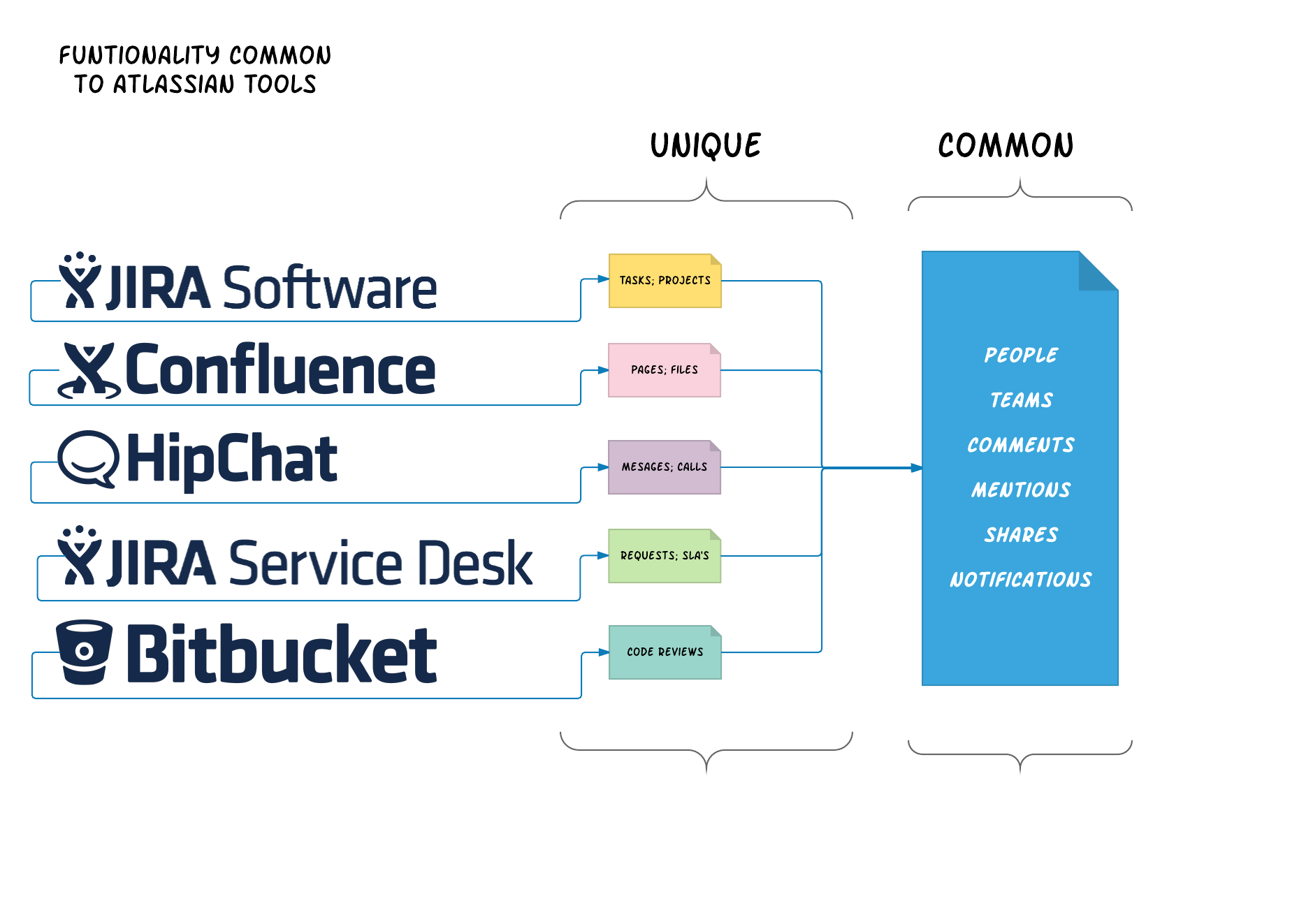 As a product manager and self-proclaimed technology geek, Mark sees an awful lot of software. If a product has a poor UI, he doesn’t give it a chance, regardless of how good the functionality is. Mark says:

“The first time you open Lucidchart, the UI jumps out at you. The layout speaks intuitively on how to use the tool."

A big Photoshop user, Mark loves that the keyboard shortcuts in Lucidchart are so similar to the programs he is already accustomed to using. The result is a familiar environment that makes creating his charts intuitive. He also loves the templates available in the product. “There are all these beautiful templates you can just jump into. And even if you prefer to start with a blank canvas, the templates at least give you an idea of what’s possible.” Mark appreciates more than anything how easily and quickly he can diagram with Lucidchart.

Already enthralled with Lucidchart and its functionality, Mark was convinced a flowchart couldn’t get any better. Then he discovered the layers feature and realized it could. “Layers is one of the best things I have seen in a charting tool,” he states. “I can change my chart without actually changing my chart!” By creating a new layer on top of his existing diagram, he can drag new shapes and alter parts of the diagram without damaging his original. He can toggle between layers to display the current way of doing something compared to the new way he is proposing.

Mark also loves being able to change the theme of his diagram. “Black-and-white diagrams can get very dull and dry. With themes, I can make things look really cool in just one click. It makes a big impact,” he says. Once he has a finished (and colorful) diagram, he can seamlessly download his diagram as a PNG with a transparent background to drop into a PowerPoint presentation or export it as a PDF.

Today, Lucidchart is Mark’s go-to platform any time he gets to make a chart (something he likes to do often).

“It’s making my job easier. I can get the right info out at the right time using the right tool. I was trying to work with shapes in Excel, and that was the wrong tool for the wrong job.”

Mark has found that, although the saying “a picture is worth a thousand words” is a corny one, it couldn’t be more true.