When Ben Enos first adopted Lucidchart for his company, he had no idea it would integrate into their company as their most used software. From communication to ideation, both Lucidchart and Lucidspark have been key players at The Escape Game.

STAY ORGANIZED
With locations and team members all over the United States, it is important to stay organized. Having a central place for all escape games to live helps team members to easily edit, review, and present their ideas with colleauges and other stakeholders.
PROVIDE FLEXIBILITY
Creating escape games involves lots of rearranging, which is why having the flexibility of an endless canvas in both Lucidchart and Lucidspark is so helpful.
COLLABORATE EFFECTIVELY
Lucid and The Escape Game alike understand the value of team collaboration. The various aspects of the Lucid Visual Collaboration Suite helps Ben and his team to continue fostering strong workplace relationships, that allow them to create their dynamic escape games.

Located in Nashville, The Escape Game is the premier provider of virtual and in-person escape rooms. Their mission is to provide interactive experiences for every guest. The Escape Game currently has 16 locations with plans for further growth in the future.

Ben Enos, senior director of product design at The Escape Game, has been a long-time fan of Lucidchart. The Escape Game is a 60-minute escape game adventure with a wide variety of games. These games provide an immersive experience for everyone. With more than  20 locations nationwide, they offer  both virtual and in-person games.

Ben and his team first started using Lucidchart around five years ago, in the “early days.” Before they had Lucidchart, they would have to draw everything out on a whiteboard. 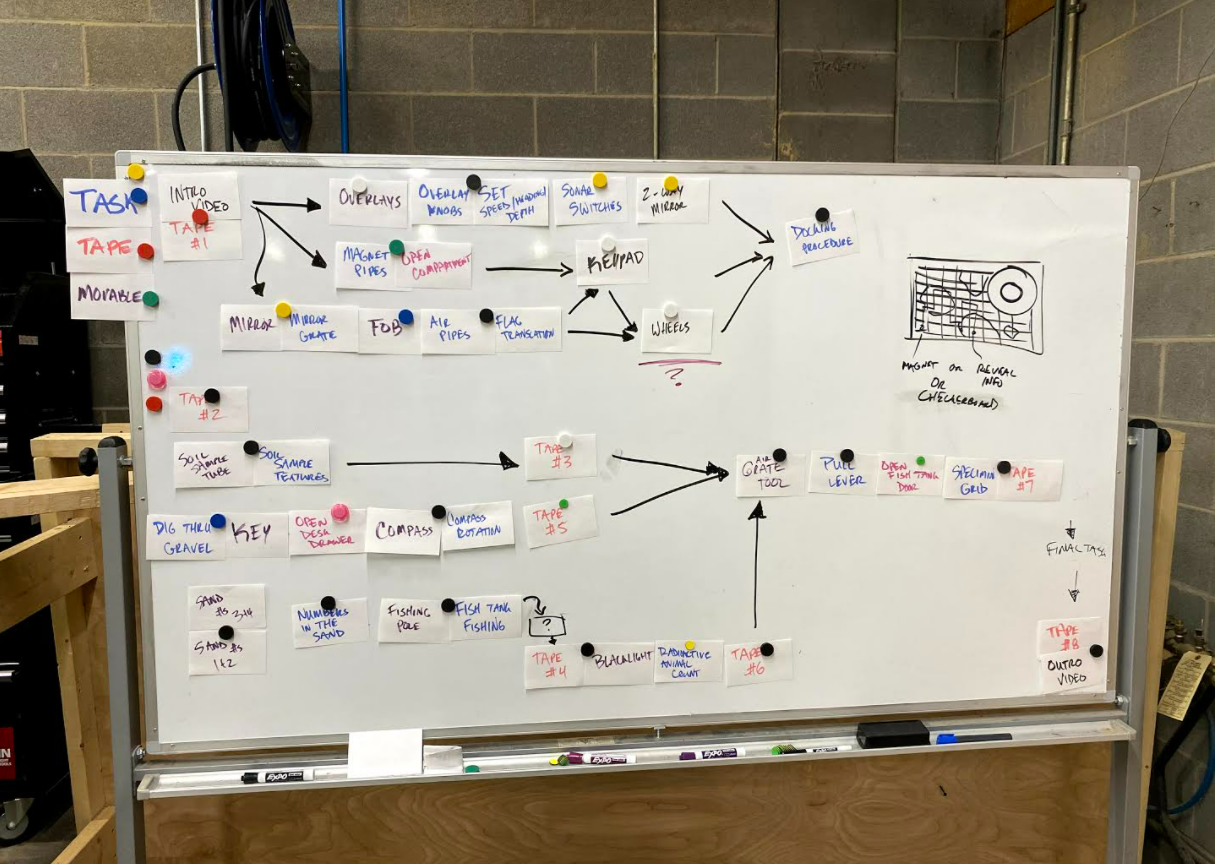 He and his team primarily use Lucidchart to design game processes in a flowchart template. From there, they walk the team through the flow that the user would go through in the game, mapping out the pathway, identifying roadblocks, clues, and more.

“The biggest help that we’ve had is being able to visualize. Everyone here communicates visually, so being able to mock something up quickly has been very helpful.”

In addition to building game process flows in Lucidchart, The Escape Game also builds out tech flows that run through different game scenarios. Because each game has multiple pathways and outcomes, it is important to walk through them as a team, delivering the best experience possible to their users. These tech flows include lots of “if-then” or “if-else” statements.

In addition to Lucidchart, The Escape Game began using Lucidspark in 2020  during the pandemic. Everyone was working remotely, and they needed a way to brainstorm, plan, and ideate game ideas together. They also began creating remote games so people could still come together and have fun from anywhere! Lucidspark has helped them plan out partner games with several companies including Amazon, Disney, and ViacomCBS.

When collaborating with other companies and organizations to create the games, many stakeholders are involved across multiple departments. Having a software  such as Lucidspark has been monumental in providing a space for everyone to ideate and share their thoughts.

The Escape Game team is constantly working to bring fun, exciting, and challenging games to their customers, which requires hard work, organization, and flexibility. Some of the key benefits of using Lucidspark and Lucidchart for Ben and his team have been:

“Productivity-wise, we have saved tons of time. We’re updating the Lucidchart board once a day for two or three weeks. If we were to do that on the whiteboard, that would take a lot longer...we definitely know we are more productive.”

Among the features that Lucidchart and Lucidspark offer, Ben and his team have several favorites. For communication, they love using the brainstorming features of Lucidspark and the color-coded custom shapes in Lucidchart. For functionality and planning, they use Lucidchart to build room layouts.

Lucid and The Escape Game both understand the value of team collaboration. Collaboration fosters strong workplace relationships, connection, and better performance. The Escape Game has challenged families, friends, and teams to work together to accomplish a goal and have fun while doing it. On the backend, building the escape rooms requires the same level of collaboration.

Use Lucidchart to seamlessly collaborate with your team and optimize processes.